Kids love dinosaurs! What kid doesn’t already know the classification names of creatures that you have never heard of before? Sure, you know T.rex. But do you know Anatotitan? Colepiocephale? What about  Piatnitzkysaurus?! Which only goes to show you that, as always, our kids are way ahead of us. They know all about the latest discoveries, including information on their eating habits, coloration, stature, social habits, when they lived, why they died, and so much more.

But wait! Let’s stop and think about this. How much of this information is true? Many of the books our kids read from the library present a real-life world for these creatures, without offering up much in the way of proof. So, in other words, how much is science, and how much is interpretation? Some say dinos lived millions of years ago, some say not. Some say they died out by way of a giant meteor, some say by a flood. And some say they have feathers, some say not. What has actually been observed, and what is somebody’s creative abilities taking over? If your kids love dinosaurs, then you need to help them know the truth about these strange beings. 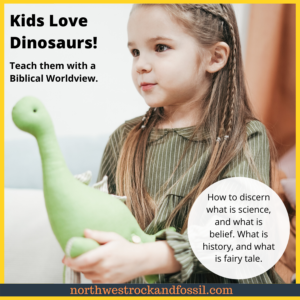 When it comes to dinosaurs, there is a vast difference between what we know to be true about them, and what is imagination. When my grandson was 5, we took him to see the popular movie, “How to Train Your Dragon.” It was such a fun movie, and very well done. But what was I supposed to say to him when he began to ask questions about these creatures? What of all that he saw in the movie was true, and what was not? Why couldn’t he train a dragon? Where had they gone? And are dragons dinosaurs? Oh, that last one is the one that leads to all sorts of great conversations! And all of these questions show how a wildly entertaining movie can stir deep imaginings.

Another time, we visited the Museum of the Rockies in Bozeman, Montana, They have a wonderful dinosaur display. And they cover many of them with feathers. They have very convincing reasons for why they do this. But what of it is true? You can bet your child will be thoroughly convinced of this reality not because he read the explanations, but because he simply saw them portrayed that way.

Your young kids will enjoy this study on dinosaurs – Fossils and Dinosaurs for Little Eyes, the book. And for you older student, check out Fossils, Dinosaurs and Cave Men, the kit.

So what do we know about dinosaurs? We know about their body structures, and their size. And we know, by and large, that we have found their fossils almost invariably, torn apart in heaps, buried in sediment. (When we host dino digs in eastern Montana, this is exactly what we find.) Occasionally you might find one that is more complete, but that is rare. And we know something of eating habits based partially on coprolites (dino poop) that we have found. 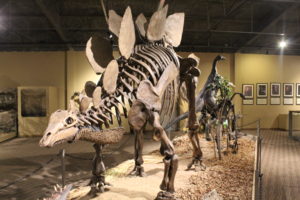 We will continue to learn things as more discoveries are made. But these are things we know about them based on scientific discovery and method.

Just about anything else that our kids say we know about them is likely to have come from the mind of a dinosaur lover that also has an evolutionary world view. This includes things like their physical coloration,  when they lived, and the world they lived in, to name just a few. And if that is the case, then that will influence just about everything that your kids think they know about dinosaurs.

Of course, you know that I BELIEVE that dinosaurs were created, and lived with man, about 6000 years ago, and that most of them were either destroyed by the Flood or shortly thereafter as a result of trying to live in a scarred world. And that is just the point. This is what I believe. But it is based not only on the evidence all over the world of dinosaur graveyards, but also on having a historical account of what happened about 2500 years after creation. The Flood. It was a real event, and was instrumental in destroying these greatest of the Lord’s creatures. You can find this historical account in Genesis 7-8.

And there are others who BELIEVE that dinosaurs evolved from some sort of pre-historic creature, and roamed the earth millions of years ago, only to be destroyed in some sort of catastrophe, like a meteor hitting the earth. It was a big catastrophe and it killed them off. Along with this belief (which many accept as science), many have created a whole scenario for the dinosaurs, including things that we simply can’t know, because there is no way to study them.  There is much we can learn from bone structure­­, coprolites, and such. But beyond that, we are simply left to our own creative devices. And I can’t emphasize enough that this alternate view of dinosaurs, including a story that involves millions of years, is not based on a historical narrative. It is tempting to create a world for the dinosaurs, because they are so fascinating. But the danger of doing this, or of accepting somebody else’s interpretation of their world, is that it likely points away from Scripture, and from the God who created them.

Help Your Kids Learn the Difference

This is where you, as a parent, need to get involved. Find out what your kids are reading and watching. Discuss those dinosaur movies and books that they love. And ask them some questions: you just might be surprised at their answers. Many parents are. Ask things like, “When do you think that they lived?” “What was their world like?” “When do you think they disappeared?” “Did they live with man?” “Why don’t we see dinosaurs today?” “What do you think happened to them?” And always follow up with this all important question, “How do you know that?”  These simple questions will help you to see what is influencing your child’s thoughts about these creatures. Use their answers as springboards to finding out the truth of what they are hearing. There are many good resources to find answers to these questions. You can find many good articles on most questions that kids have at creation.org (Creation Ministries International.) And always, our starting point must be what Scripture has revealed to us about them. It is our history, and it is true.

Our kids love dinosaurs. And as parents of dino-loving kids, we need to be sure that our kids are getting the right information, that they are learning how to discern what is science, and what is belief. What is history, and what is fairy tale.

Check out this great study on dinosaurs for the younger crowd.  Fossils and Dinosaurs for Little Eyes, the kit. For your middle schooler, Dinosaurs for Kids. And for your high school student, help get them grounded in their worldview as they study dinosaurs: Fossils, Dinosaurs and Cave Men.

Be sure to  check out our Youtube channel here, and subscribe to it to get short videos that your kids can watch to learn more about geology and the earth around us.