How Do You Teach Geology

How Do You Teach Geology? (Part 1)

“I really don’t want to teach geology.” “My state doesn’t have a requirement for teaching that.” “My child isn’t interested in science.” We’ve heard these same thoughts many times. In fact, at a recent convention, one attendee said that she had been avoiding us for years, and thought it was finally time to buckle down and do geology. We agreed! But why should we teach geology? And just how do you teach geology? It has weird words, and it seems that if I teach it I will end up tearing down everything that I have wanted my children to believe about Genesis and the Creation of our world, not to mention whether or not the Flood really happened. So let us give you a few pointers on how to teach geology. Maybe we can take out some of the pain and confusion! 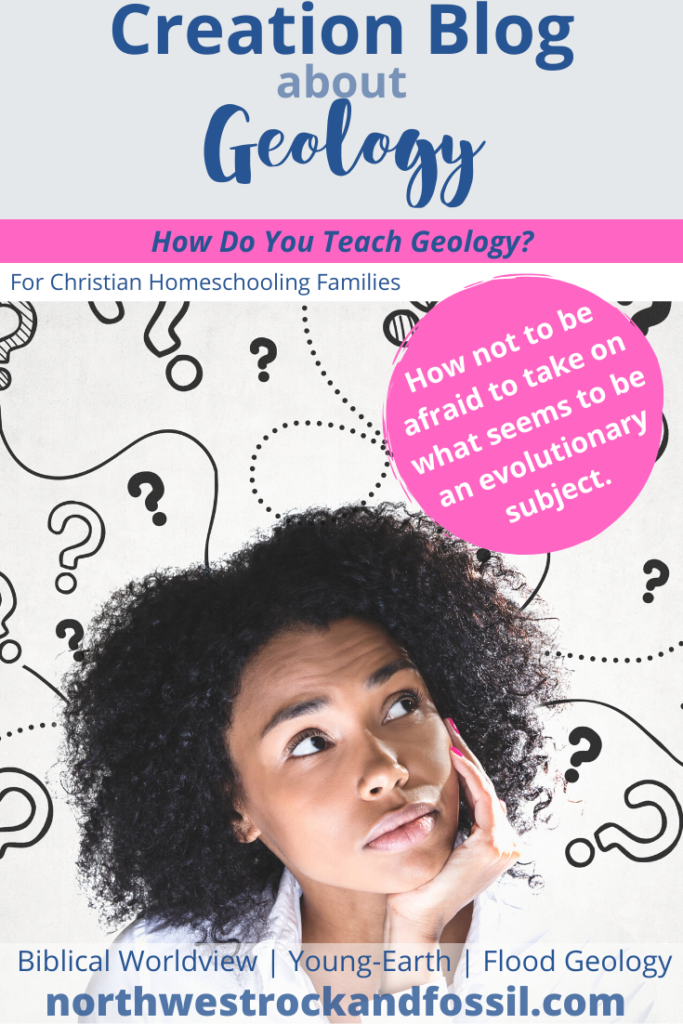 Before we tackle the how, though, it is important to know why you should teach this very important subject. When we talk about Genesis, and whether or not we can believe it, we need to acknowledge that the first few verses of Genesis are about the earth. The land, the sea, the heavens. Our Bible is built on the truth of how our earth was created. If we mess with our understanding of that, we call into question other things in Genesis, like the chronologies and genealogies. Why is that important?

The Bible and History

The book of Genesis is a history book. It lays out timing and dates for several very important things – creation, the Flood, and genealogies/chronologies. If we start playing around with these, we end up cutting off the lineage for our Messiah. And without a Messiah, our salvation and faith is completely without a foundation, and we are most to be pitied, as Paul said. So it is very important that we understand that if we don’t have a good understanding of our earth’s history, then we are setting ourselves up for a faith that is stripped of its power, because we no longer speak with the authority of the Scriptures. Or we back away completely from the faith.

Geology is the Foundation for Other Sciences

Geology is also the foundation for several other sciences, including biology, anthropology, and paleontology, for example. If you study biology, then you are going to necessarily study the evolution of animals and man. The standard teaching of biology will assume that it took millions of years for evolutionary changes to happen, and many of their conclusions are drawn from a faulty understanding of the Geologic Timetable. If you study anthropology, you are studying the history of man and his cultures. This has its foundations in the age of the earth, and the evolution of man. If you study paleontology, you are studying fossils, you are, again, in the world of evolution, looking for clues to how creatures evolved, and when these creatures lived. These, too, are bound up with what geology has to say about the the age of the earth, and the dating methods for various landforms. So you can see why it is so important to know your geology.

Our desire should be to help nurture scientists with great powers of observation. Science is built on observation. But it is also built on the ability to test and repeat certain hypotheses to see if something is as you think it might be. And that should be our desire as we approach geology in particular. Geology is that crazy science that, in secular circles, is built on not just good science, but also on a belief system that has no history to corroborate it. And this belief system has successfully been incorporated into the study of geology as if it were science.

I readily admit that I have a belief system that impacts how I view geology. Mine is built, however, on a tested historical narrative found in the Bible. Secular science does not have that.

Once we have it settled that geology is important to teach, then it becomes much easier to actually take it on as a subject to teach to our kids. So, how to teach geology to our kids…

How to Teach Geology

When we teach English and math, for example, we plan on teaching it, usually, every year. We add a few new concepts each year. It is the same in geology. If it is so important, then we really shouldn’t relegate it to a “one and done” type of class. This is important stuff!

So how should I teach geology? We would suggest that you try to hit some aspect of geology each year. Not a full-blown study, but just some aspect. Maybe one year it is volcanoes, maybe for a unit study. Then the next year dig into the atmosphere. As they get older, especially high school, you can do longer and more in-depth studies. High school is a great time to start working through the philosophical arguments that surround geology. That could include things like the whole creation and evolution debate, radiometric dating, the supposed evolution of man, the history of dinosaurs, the supposed dinosaur to bird evolution,  just to name a few ideas. But at least while they are young, help them to enjoy the journey of this wonderful world that we live in. Study gems, crystals, rocks, dinosaurs, meteorology, archaeology. There are so many subjects to investigate!

When you study geology, it is important to get that hand-on aspect of it, whether it is handling samples, or going on a field trip to explore. But there is almost nothing worse than studying geology from pictures alone.

Should I Teach Evolution?

And this study should always be accompanied by a Biblical perspective that helps our children see the difference in how our world can be viewed, either from a uniformitarian/evolutionary view, or a creationist, Biblical view. In short, understanding the difference between the science and the non-science. Timing of this is the issue, though.

You don’t want to be afraid to introduce evolution as a topic to be discussed. But there is an appropriate age to do that. At the beginning, we should be like the good folks who keep an eye out for counterfeit currency – they handle the real currency so often, and study it so thoroughly,  that when they do come across the fake dollar, they know it immediately. There is time as they get older to introduce other ideas. But while they are young, let them “handle” the truth!

So there you have it. It really is that easy. And even if geology is not your thing, we trust you will find your faith strengthened as you learn along with your kids.

There are so many great ways to get into geology! Want something a bit different? Check out our National Park kits and State Rockhounding kits.