Thirty years and counting, Shark Week is coming – it starts August 9! Why is it that people are drawn to these unusual creatures? It can’t be because they are cuddly and fuzzy. So I can only guess that it is because of how mysterious and dangerous they seem to be.

Add to that that they­ are remnants of a long ago world, that survived into our modern age. Oh wait a minute – is that so? 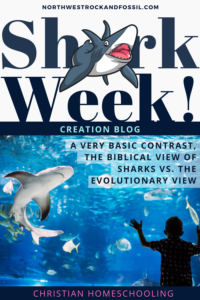 The Modern View of Sharks

The modern view of sharks is rooted in the secular view of geology – that the Earth is older than what the book of Genesis states, and that all animals are related via evolutionary processes. You may had heard it stated this way:

Although scientists tell us that shark evolution continued over those millions of years, sharks have not changed considerably.

A Biblical View of Sharks

There is another view, however, of these creatures, one that does not embrace the long ages that I just mentioned. The Bible has some very clear thoughts about sharks:

Sharks may show variation, but not evolution. This means that the variation that we find in sharks is because of their inherent DNA (just like we see variation in dogs and cats), not because of evolution. They were created, “after their own kind.” And these fossils that we love to search for tell us of extinction and death, not evolution and advancement.

You usually find shark fossils in sedimentary rock. These rocks consist of water-born rock like shale, sandstone, and limestone. This is the type of rock found in Kansas. And, not surprisingly, this is where many shark fossils have been found!

It is unlikely that you will find a shark skeleton. The structure that supports a shark is largely cartilage, and it doesn’t fossilize as well. But we do find vertebrae, teeth, coprolites (poops!), dermal scutes, and stingers. Teeth are probably the most common thing you will find – a single shark can grow upwards of 30,000 teeth in a lifetime. They generally have several rows of teeth for easily replacing others that are lost due to eating and fighting.

A great place to visit to see shark teeth is the Fick Fossil Museum in western Kansas. Many of these teeth came from Castle Rock, Kansas, home to the chalk cliffs which contain lots of marine fossils.

If you are wanting to learn more about sharks (and other great sea creatures!)  from a Biblical perspective, check out these two kits on our web site:

Geology and the Great Sea Creatures  (Grades 3-12) and

We’re on FB. Follow and engage with us there!