Is Scripture a part of your geology study?  If you haven’t been adding in the appropriate sections of Scripture that deal with geology, you might want to slam on the brakes. When you teach geology, it is almost not possible to teach it without drawing in Scripture or worldview. That is quite simply because the study of geology is bound up with the age of the earth: why the earth appear the way it does, with mountains, valleys, plains, and so on. 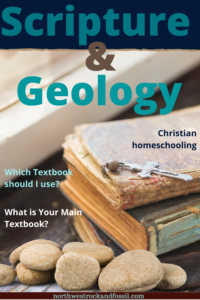 Which textbook should I use?

“But the Bible isn’t a science textbook!” Well, in the sense that it doesn’t talk about formulas and chemical compounds, no, it is not. But it is a book of history. And when we talk about geology, it is necessary to talk about the formation of our earth, what it is made of. When you talk about how the earth was formed, you need either historical testimony or scientific proof.  To prove something scientifically, you must create tests to prove it, repeat the tests, and observe the results. This simply can’t be done when we are talking about how the earth formed. In the scientific world, that requires hypotheses, ideas. But it can’t be proven. We do have, however, a historical document that tells us what happened. That document is the Bible.

Over the years we’ve seen our share of different geology curricula, for all ages. Some are Christian based, some are not. But the one constant is that they all deal with origins, primarily with the origin of the earth. The secular books will tell you that in the beginning, there was a big bang. Or some variation of that. Most Christian texts will at least mention the Creation of Genesis and the Flood with reverence, if not fully supporting it. If you don’t know your Bible, these two narratives will likely confuse you.  Let me give you an example of how this can then impact what you learn from your geology books.

One aspect of geology includes studying the types of rocks, be they igneous or metamorphic, plutonic or sedimentary; and particularly, how they formed. A common topic in geology is the Rock Cycle. This concept teaches that the rocks that we see now on the earth have been going through a giant recycling since they were first formed. Many do not know that this is not an established fact, even though it is taught that way. It is only an idea. This idea helps to solidify the great age of the earth, since it takes millions of years for these changes to take place. But what if it has never been seen happening?

In fact, the only rocks we see forming today are the volcanic rocks, and in a couple of instances, we have seen the layering that produces sedimentary rock. But we have never seen one rock turning into another. If not the Rock Cycle, then how do rocks form and change?

What is Your Main Textbook?

This is where knowing your Scripture comes in handy. Scripture is very clear that we live on a very young earth, around 6000 years old. And it is equally clear that a Flood destroyed the original earth.  A worldwide Flood easily explains the bulk of what we see on the earth today (mentioned in Genesis 7-10).  it explains the layered sediments that became rock. It explains the spewing lava that became volcanic rock. And it explains the massive heat and pressure that would have upended land forms.

I mentioned earlier that the Bible, as a historical document, could give us answers to questions about our earth. Understanding what is true about the Rock Cycle (and what is not) is much easier when you have a reliable historical document.  We need to be sure, when we are studying geology that we know when we are in the realm of history, and when we are in the science lab. The two should not be pitted against each other. They are just two different aspects of a very interesting study, the one that has fascinated me for years!

Test everything. Scripture must be our first tool, not our last.

Genesis: Rock Solid is a great short read to help you understand more about the intersection of geology, history, and science.