If you have lived in the Pacific Northwest for any length of time, then you know that there is a nasty threat that hangs over our heads daily, although most of us don’t truly think twice about it. On a clear day, I can look north and see Mt. Baker. If I look south, I can see Mt. Rainier, Mt. Adams, and Mt. St. Helens. These are all volcanoes, just waiting to pop their corks. Of these four, three of them are beautiful, typical, pointy mountains. And then there is Mt. St. Helens. It looks like somebody took a giant ice cream scoop to it’s north side and removed millions of tons of mountain. 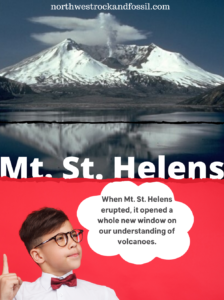 Mt. St. Helens is located about 96 miles southeast of Seattle. It is in the midst of the Cascades range, along with those several other volcanoes. And Mt. St. Helens came alive in a very dramatic way 40 years ago.

The Eruption of Mt. St. Helens

Let’s go back to spring, 1980. We didn’t live in the PNW at that time. We were still in the Midwest, watching with the rest of the world as this beast on the Pacific coast was coming to life. Each day, there was a new report of tremblors at the mountain, or of ash and steam venting from the top. People gathered to watch what seemed to be imminent. And then…

On a gorgeous morning, May 18, the mountain let loose. It all began with a 5.1 earthquake that caused a debris avalanche. The result from this was an eruption that caused the volcano to lose about 1300 feet of its height, which left a gaping, horseshoe-shaped crater on its flank.  And this all happened in the space of seconds. When you watch the videos of the eruption, is hard to tell which came first – the slide or the explosion. It was that fast. Somewhere around 540 million tons of ash shot out from the volcano.

Fifty-seven people lost their lives. Homes, bridges, roads, railways, lakes, ponds, farms either destroyed or severely damaged.  The people of Yakima, in Washington state, saw a lovely morning turn black as midnight. They shoveled ash for weeks, probably around 600,00 tons of it. But from where we were watching in the middle of the country, it was none of this. It was gorgeous sunsets as the debris in the atmosphere created unprecedented chances for the sun to paint the sky.

Over the last 40 years, Mt. St. Helens has given wonderful opportunities to learn more about the world of volcanoes and earthquakes. The study of volcanoes is called volcanology. And if you are making a trip to the Pacific Northwest, you really should try to fit in a visit to the Mt. St. Helens area. It is spectacular!

(December 2021 – Please note: the Mt. St. Helens Creation Center is undergoing management changes. Please contact them for current information.) One of the best ways to explore this area is to start at the Mt. St. Helens Creation Center. Paul Taylor, runs this center, and as you might guess by its name, it is a center devoted to a Biblical viewpoint not only of what happened at Mt. St. Helens, but also how it sheds light on the Genesis Flood and the effects of it on our earth. Paul offers very informative interpretive hikes and excursions in the area.

One of the fascinating aspects to investigate at the Creation Center is the trees that are petrifying in Spirit Lake at Mt. St. Helens as a result of the explosion. The study that has been done on these trees has caused scientists to re-evaluate how they think trees petrified in Yellowstone National Park. Although this might not seem like a big deal, it is, when you realize that for years, the National Park Service has interpreted the petrified trees of Yellowstone as something that happened over millions of years. The evidence at Mt. St. Helens is causing them to take a hard look at their timeline for what caused the petrification in Yellowstone.

In addition to the Mt. St. Helens Creation Center, you can also do some lovely day drives of the area. The more well-traveled way is by going to the Johnston Ridge Observatory on Highway 504, Spirit Lake Highway. It provides a wonderful view of the volcano, as well as having lots of interactive displays. The other way to go is by traveling to Windy Ridge Observation Point, which is on the opposite side of the volcano. This highway often does not open until July. But it is a beautiful drive through the forest, with beautiful views of the Cascade volcanoes along the way.

But this beautiful view belies the truth of volcanoes – they are nasty beasts, spewing poisonous gases into the air, not to mention the obvious damage done by lahars, lava, earthquakes, and more. If we are to understand how volcanoes fit into a perfect world that the Lord created, we have to understand the nature of the Genesis Flood.

Volcanoes and the Genesis Flood

The Genesis Flood tore our earth apart leaving weakened areas where volcanic gases and magma could rise to the earth’s surface. Even though the Flood took place several thousand years ago, we are still living with the results of this catastrophic event. Depending on how you look at it, we are either privileged or cursed to have a few prominent volcanoes in the United States that we can study. Mt. St. Helens is an obvious choice. But you can also go to El Malpais National Monument in New Mexico, Yellowstone National Park, or to Kilauea In Volcanoes National Park in Hawaii, to name just a few.

Volcanoes and earthquakes make fascinating subjects to explore with your kids. There is the obvious activity of making things that explode. What kid doesn’t love that? But there is much more than that to explore. At Northwest Treasures, we have several books/kits that can help you as you study this fascinating area.

Starting with your youngest kids, we have Volcanoes for Little Eyes. This study includes an explanation of the rocks and minerals, the Flood, a brief study on atoms and elements, types of volcanoes, eruptions, and earthquakes. You can purchase just the book, but you can also get a complete kit with the volcanic samples that you would need to complete the study. Things like pumice, tuff, obsidian, and other lavas. And don’t forget the minerals that make these! These are included in the kit as well.

For your older kids, we have several ways you could go. These studies cover much of the same material, but they do go deeper. Each of these is also available either as a book study, or with the samples.

The eruption of Mt. St. Helens makes a great starting point in any study of volcanoes. But as you study these amazing geologic forms, remember that it is a great way to get a picture of the power of our God when he set in motion the opening up of the fountains of the great deep at the time of the Flood. This is a tremendous way to help build your child’s faith in Scripture and its truth.

We’re on FB. Follow and engage with us there!