You can see two excellent resources to help you in your geology study at the bottom of the page.

I was struck the other day when reading in my Bible, by a verse from Isaiah 28:10. It was a passage that I have struggled to understand. And from commentaries I have looked at, I think I was in good company.  The passage mentioned “Precept upon precept, precept upon precept, line upon line, line upon line.” As I sought to understand this in its context, there was another thought that kept running through my brain. It was the idea that we learn by building a little at a time, adding to what we already know. This is not an earth-shattering revelation. But I do think that it has implications for how we teach our kids, and what we are willing to undertake with them. 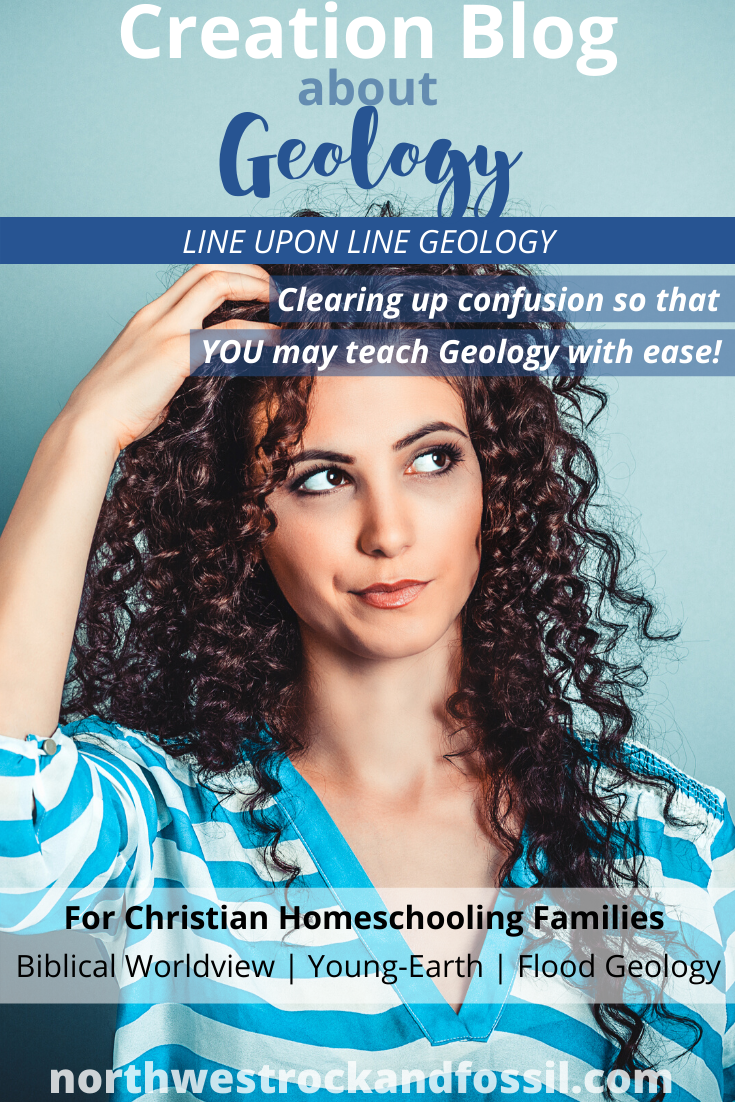 Geology for example. Of course you knew I would bring that up! But it is a subject that many people avoid, or don’t spend much time with, because it is just too strange. Or too hard. Or too whatever. You fill in the blank. But truth be told, that is the way with anything new that we start. You learn a new language by getting some vocabulary. “Hello. My name is Vicki. What time is it?” And then you build on that. Before you know it, you can order from a menu. Or check into a hotel. Or venture out in a foreign city by yourself.

It is the same with geology. Many seem to think that they can’t even begin to teach geology if they don’t have all sorts of arguments nailed down about the geologic timetable and evolution. Or radiometric dating. But in order to understand these kinds of things, you need first a basic understanding in some science, and then in history, and some philosophy.

Yes, geology is all of those. It shouldn’t be, but it is. Most textbooks take the science of geology, the foreign language that we need to know, and then dress it up in clothes that make it so we almost don’t recognize the subject. Modern geology is taught as a mixture of good science, along with a mix of philosophy that masquerades as history. But if you don’t know this, then when you do study geology, you are likely to end up confused, and with your faith teetering. And then many choose just to not go there. No geology study. No way.

But if you don’t study geology, you are surrendering the battle ground where we confront the very important Biblical issues of the veracity of Genesis, and the reliability of the Scriptures. If you don’t tackle them head on, then your children will be prime candidates  for indoctrination when they hit biology. And it won’t stop there. Many of the scientific disciplines are inextricably bound up with an understanding of the age of the earth – paleontology, anthropology, archaeology. And yes, history is impacted, too.  And that understanding comes from geology.

But it doesn’t have to be that way!  You don’t have to be a victim of the confusion that accompanies geology when science, history and philosophy are all jumbled together.  There is a vocabulary to learn first, before you visit that “foreign country,” so to speak. So learn some vocabulary, add to that a few rock samples, and a fun field trip, and you have just started on a geology journey! It is so important to set that foundation for our kids, helping them to see the difference between what is science, and what is not.

Line upon line. A little bit at a time. This is one of the reasons that we encourage the study of geology a little bit each year. Over time, you will easily be able to sort out the science from the philosophy. Philosophy must become a part of the geology conversation. But we need to recognize first the two areas, and not mix them.

Line upon line, precept upon precept. We mustn’t be in a hurry to rush the process of understanding this field. Don’t be afraid of this vitally important journey!